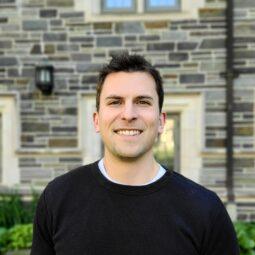 B.Sc., University of Illinois at Urbana-Champaign, 2010

Steve grew up in the Chicago suburbs and has spent most of his life throughout Illinois. At UIUC, he worked with Professor Chris Schoenherr to study the regulatory mechanisms of the transcription factor CTCF. After graduating, he worked for Thermo Fisher Scientific for 6 years as an analytical biochemist and research scientist, where he developed and validated new immunoassays. He also worked towards a MSc at UIC during this time where he engineered fluorescent antibody-drug conjugates for in vivo imaging and treatment of solid tumors. Steve then moved to Salt Lake City to start his PhD with Professor Jen Heemstra at the University of Utah, and the lab subsequently moved to Emory University in Atlanta. Steve’s doctoral research sought to develop new chemical labeling methods and RNA-seq workflows to better understand  A-to-I RNA editing mechanisms. In spring 2021, Steve joined the MacMillan group as a postdoctoral fellow.